IACI Symposium on Birth of the Irish Respublic A Success 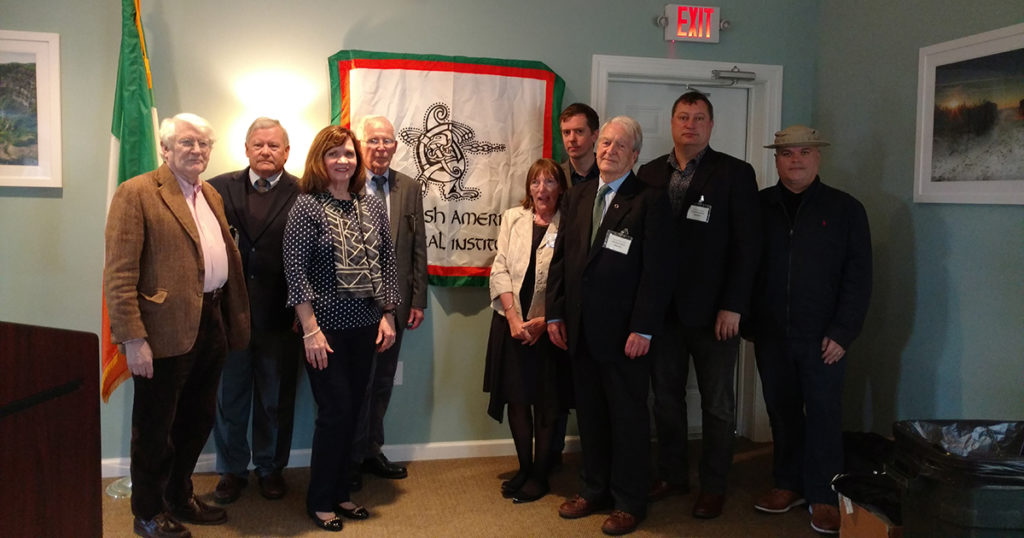 On Saturday, November 2, a meeting room at the Friendly Sons of the Shillelagh inBelmar was filled to capacity with Irish history enthusiasts gathered together for the IACI symposium, “Ireland 1913 to 1923: A Decade in a Day.” The day-long event, held in coordination with Ireland’s “Decade of Centenaries,” examined a decade of revolution—ten momentous years in Irish history that witnessed the birth of a nation and were instrumental in laying a foundation for today’s Irish Republic.

The Deputy Consul General of Ireland in New York, Mr. Seán Ó hAodha, participated and shared opening remarks and thought-provoking insights gained as an Irish Government representative focused on promoting Irish interests and supporting a strong partnership between the U.S. and Ireland. Dr. Peter Halas, Chairman of the IACI-Jersey Shore Chapter, provided an overview of the day’s agenda and introduced historians from the U.S. and Ireland who examined key events in this nation-shaping decade.

Maureen Dunphy Brady, who holds an MA in Irish and Irish American Studies from NYU Glucksman Ireland House, examined the period from 1912 to the 1916 Easter Rising.

Henry McNally, recipient of the 2019 Eoin McKiernan Award, discussed the post-Rising period, the 1918 Election and the creation of Dáil Éireann, Ireland’s Parliament.

Conor McNamara, Scholar in Residence at the National University of Ireland Galway delved into the Irish War of Independence, the Anglo-Irish Treaty and the partition of Ireland.

Mícheál Ó Máille, recipient of the 2016 Douglas Hyde Award summarized the day, closing the event singing Ireland’s national anthem, “The Soldier’s Song,” in Irish, bringing the room to its feet.

A special guest of the day was Erskine Childers IV, named for his grandfather, Erskine Hamilton Childers, the fourth President of Ireland. “Having Erskine in attendance was indeed special. It was a ringing endorsement of our event and put an exclamation point on the day,” said Henry McNally.

Naomi McCooe, Belmar, said, “The speakers brought stories of the Irish leaders of this decade alive with their fascinating talks. I left with a clearer understanding of Irish history in all its many facets.”

Joe Dunne, Manasquan, said, “Although the day was focused on factual information, there was an overwhelming sense of emotion too. Many people in the room had a personal connection to the stories since a direct family member, a parent or grandparent, lived through those troubled times.”

Tom McDonald, Little Silver, said, “The day exceeded my expectations. The caliber of speakers and the quality and depth of information shared was remarkable.”

“The community really came together to make this an amazing event. We sincerely thank the many local businesses and organizations who supported our efforts as Sponsors, Patrons and Friends. Special thanks to NYU Glucksman Ireland House for their Gold Sponsorship. We sincerely thank the historians who traveled from near and far to share informative presentations and to all the individuals who attended the symposium. Proceeds will be put toward the IACI monthly Irish culture programs and expanding our local offerings. We’re looking forward to a great 2020,” said Chairman Halas.

The Irish American Cultural Institute, founded in 1962, is dedicated to preserving the legacy of the rich history of Ireland and Irish America through its cultural programs. The mission of the Jersey Shore Chapter is to provide resources to preserve and promote Irish and Irish-American cultures. The chapter hosts monthly programs on the second Monday of the month at the Friendly Sons of the Shillelagh in Belmar featuring experts on Irish history, music, culture and heritage. Annual membership dues are $50 per person. For more information on 2019-2020 programs, see Upcoming Events at facebook.com/IACIJerseyShore.